On February 23, Russia announced the establishment of the Reconciliation Center at the Khmeimin airbase in the Latakia province. The US established a similar center in Amman (the capital city of Jordan). The center was set up in line with agreements reached by Russia and the United States to facilitate the negotiations between the Syrian government and opposition and to organize deliveries of humanitarian aid.

The ceasefire in Syria came into effect on February 27. The truce does not apply to the Islamic State and Jabhat al-Nusra extremist groups (outlawed in Russia) and other groups designated as terrorist organizations by the UN Security Council. 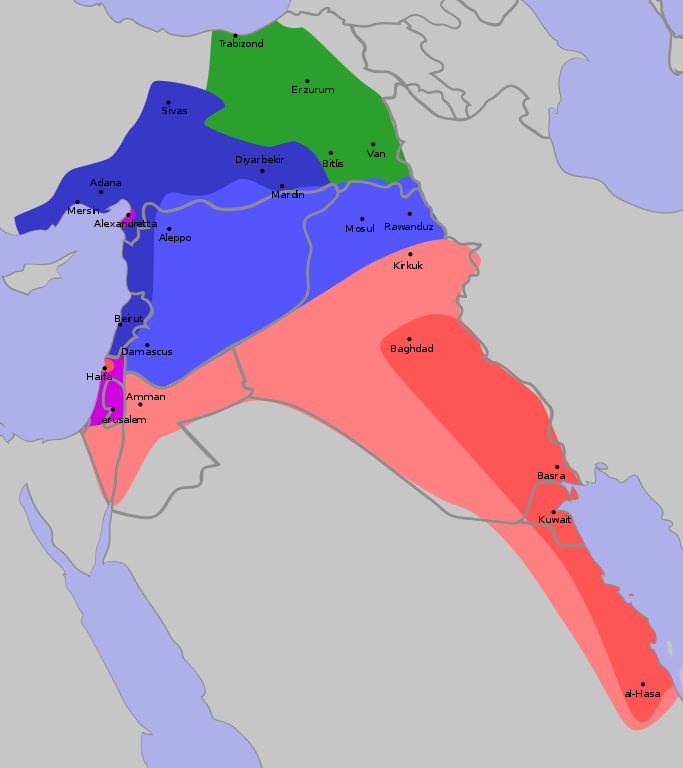 Map of the mandate of Syria and Lebanon from 1920 which closely resembles the currently evolving NATO spheres of influence. Some 100 years later and it is still the same Actors [Russia and NATO nations] fighting over and then dividing up the lands of Syria and Iraq which was then known as the Greater Levant and hence the original name of the demons of ISIS known also as ISIL [Islamic State of the Iraq and the Levant].

The Sykes–Picot Agreement officially known as the Asia Minor Agreement, was a secret agreement between the governments of the United Kingdom of Great Britain and Ireland and the French Third Republic, with the assent of the Russian Empire, defining their proposed spheres of influence and control in Southwestern Asia should the Triple Entente succeed in defeating theOttoman Empire during World War I. The negotiation of the treaty occurred between November 1915 and March 1916, the agreement was signed on 16 May 1916, and was exposed to the public in Izvestia and Pravda on 23 November 1917 and in the British Guardian on November 26, 1917.

The Agreement is considered to have shaped the region, defining the borders of Iraq and Syria and leading to the current conflict between Israel and the Palestinians.

Were we able to connect the dots of history and the future?

What had changed over the course of 100 years of Wars? Not much really. What they did over a 100 years ago in 1917 they did again in 2016 to the same peoples in the same lands with the same affects.

Syria and Iraq were once again divided and this time the Russia chose a very cozy strategically located port State to Administer while the other vultures fought over the remaining carcass of the Levant. Balkanization as the real goal, but disguised as Nationalism and Freedom was one of their favourite tactics to achieve their sinister means. They used it over and over again.

Deceit and Delusion pervaded. Enough rope at first as slack and then without warning enough rope to hang themselves. Woe to the Warmongers. Just as was foretold in the Quran that upon the rediscovery of the body of the Pharoah it would sign as a sign for the rise of the Dajjal or the Anti-Christ. So told so born was Political Zionism and the Zionist State of Israel.

Surah Yusuf [Jonah 10:92] Yusuf Ali Translation: “This day shall We save thee in the body, that thou mayest be a sign to those who come after thee! but verily, many among mankind are heedless of Our Signs!”

Sheikh Imran Hosein talks about What have happened in 100 years since the body of Pharaoh was discovered and the establishment of the global Zionist movement and the destruction of the Caliphate in Turkey. All in the course of 100 years. We were living in truly Biblical Times in the Zurich Times Zone.

The Zionist Attack On Syria By Sheikh Imran Hosein.

A newspaper article from The Telegraph in 1917. The first Zionist Congress was held in Switzerland in 1897 and The works of Theodor Herzl were absolutely critical here to understand past and future events. Wherever and whenever we saw the Swiss Banksters and Gangsters lining up their resources we knew Wars would start and Lands would be divided up for further Wars and Profits.

The first Zionist Congress was called by Theodor Herzl as a symbolic Parliament for those in sympathy with the implementation of Zionist goals. Herzl had planned to hold the gathering in Munich, but due to local Jewish opposition he transferred the gathering to Basel, Switzerland. The Congress took place in the concert hall of the Basel Municipal Casino on August 29, 1897.

In 1894, Captain Alfred Dreyfus, a Jewish officer in the French army, was unjustly accused of treason, mainly because of the prevailing anti-Semitic atmosphere. Herzl witnessed mobs shouting “Death to the Jews” in France, the home of the French Revolution, and resolved that there was only one solution: the mass immigration of Jews to a land that they could call their own. Thus, the Dreyfus Case became one of the determinants in the genesis of Political Zionism.

Zionism seeks to establish a home for the Jewish people in Eretz­-Israel secured under public law.

The Congress contemplates the following means to the attainment of this end:

1. The promotion by appropriate means of the settlement in Eretz-Israel of Jewish farmers, artisans, and manufacturers.

2. The organization and uniting of the whole of Jewry by means of appropriate institutions, both local and international, in accordance with the laws of each country.

3. The strengthening and fostering of Jewish national sentiment and national consciousness.

4. Preparatory steps toward obtaining the consent of governments, where necessary, in order to reach the goals of Zionism. Socialism has several aspects. Economically, it means the socialization of the means of production; politically, the establishment of the dictatorship of the toiling masses; emotionally, the abolition of the reign of egotism and anarchy which characterizes the capitalistic system.

And so it is with Zionism. Economically, it means the concentration of the Jewish masses in Palestine; politically, the gaining of territorial autonomy; emotionally, the striving for a home.

Our chief concern, however, is our program. The class interests of the Jewish proletariat remain unchanged. Our ultimate aim is Socialism; our immediate need is Zionism. The class struggle is the means to achieve both. We should have learnt that Zionism was distinct and a separate process from what was Judaism as in the written books transmitted through Prophets and Disciples and Saints.

Zionism was political expediency to establish a Nationalist State of Zionist Israel regardless of the inconvenient fact that it was the Messiah’s job to return and establish a Jewish State for Jews as the King of the Jews based on Religion not Nationalism.

However, such facts were forgotten as the Media Presstitutes wrote and printed whatever their Masters told them to without question and in fear as cowards.

Over 100 years of politics finally led to the new partitioning of Syria and Iraq for Russia and the NATO alliance until the next War to end all Wars was waged by the King of the Jews both fake and real. Two World Wars were not enough for the Warmongers. A third and final one was required to achieve real progress.