With all of the investigation aka cover-up that is being performed by the FBI in Las Vegas you would think their inbox would be full of leads to follow aka whitewash and deny that they could not possibly have time to chase down 2 missing Piglets in Utah, but you would be dead wrong.

Some of the photos in this article are disturbing so please exercise viewer discretion. All of the photos can be found at The Intercept. Our fondness for swine flesh may be diminished as a result of this article. Apologies in advance. Yes the FBI devoted a sizeable portion of its Utah staff to investigate 2 missing Piglets with an armada of 6 cars.

This story has coded hidden in plain sight meanings which we will explain, but first some background on the 2 poor Piglets. Green Greenwald of The Intercept no less of Snowden fame is reporting on this fiasco;

[The Intercept] On the last day of August, a six-car armada of FBI agents in bulletproof vests, armed with search warrants, descended upon two small shelters for abandoned farm animals: Ching Farm Rescue in Riverton, Utah, and Luvin Arms in Erie, Colorado.

The FBI agents searched the premises of both shelters. They demanded DNA samples of two piglets they said were named Lucy and Ethel, in order to determine whether they were the two ailing piglets who had been rescued weeks earlier from Smithfield.

The FBI agents ordered staff and volunteers to stay away from the animals and then approached the piglets. To obtain the DNA samples, the state veterinarians accompanying the FBI used a snare to pressurize the piglet’s snout, thus immobilizing her in pain and fear, and then cut off close to two inches of the piglet’s ear.

The piglet’s pain was so severe, and her screams so piercing, that the sanctuary’s staff members screamed and cried. 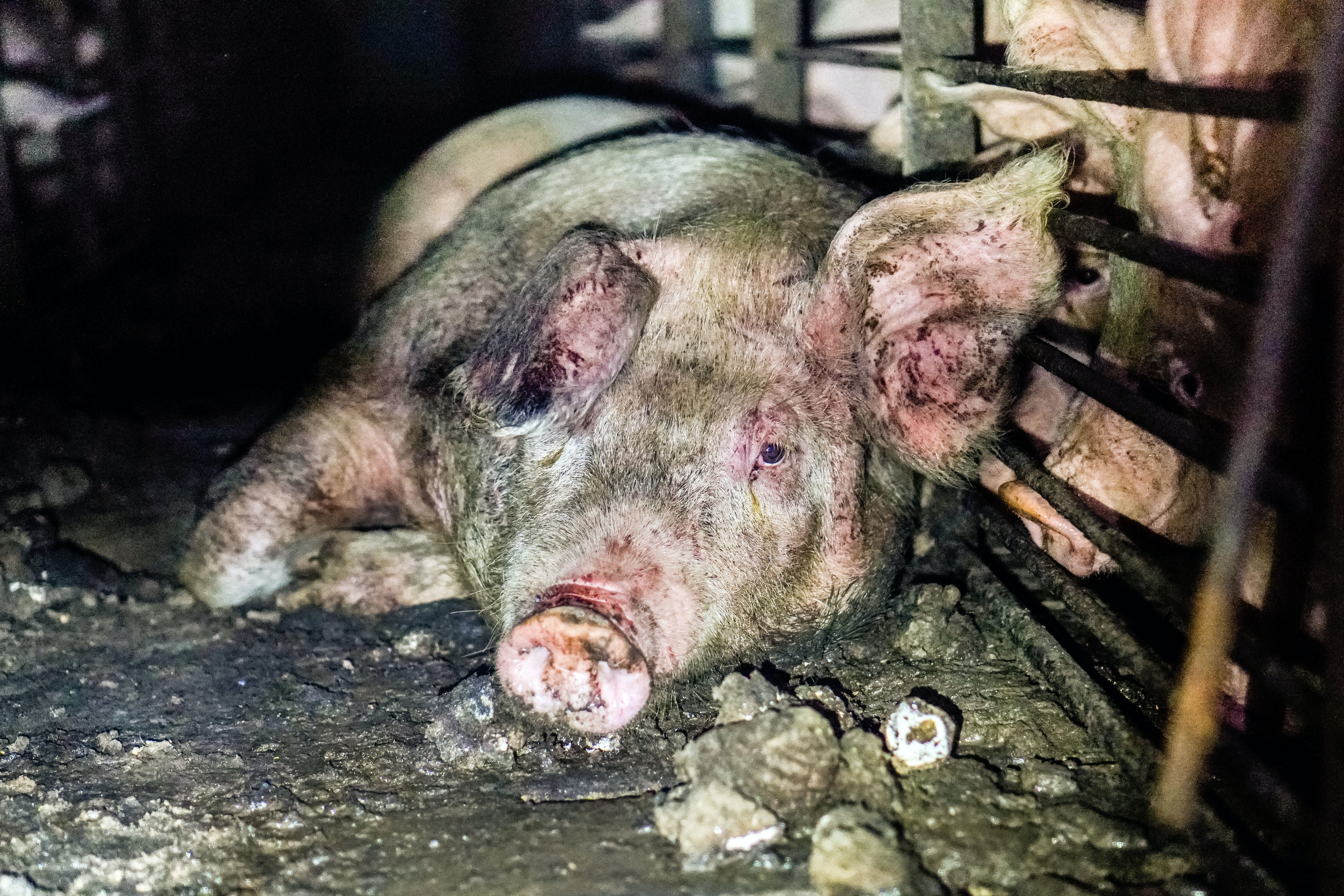 Yes folks the American Law Enforcement and Military we see Trump praising for their amazing valor and work are cutting the ears of piglets for DNA samples. These are same Military folks Americans are taught to automatically obey and respect regardless of their actions as seen by the Mind Programming behind the NFL National Anthem Ritual.

This raid took place in August, but the meaning of happened here is only now making sense to us.

So What is really going on here?

Why are these Piglets so valuable and why is the FBI so interested all of a sudden in Animal rights? Because what is happening underground at Military Bases and what these Piglets represent. These Piglets are likely Hybrids that were being used for their sick Human Animal Hybrid Experiments.

Where is the evidence for this speculation?

Take the testimony of Arizona Wilder from the 1990s as a good starting point. On Deep Underground Military Bases Sadistic Satanic Rituals are being conducted with Children and Animals. And since Pigs have an anatomy very similar to Human anatomy they are the preferred choices for these experiments.

Further confirmation of this fact from an ex-CIA/NSA Agent who goes by the Trade Name of TruthCat offers some the history of the Deep Underground Military Base near Los Angeles, California under the Getty Museum. Yes an entire Underground Secret Experimentation Facility right under a Museum. Perfect cover for a Hidden Crimes.

He also claims to an Astral Super Solider that is fighting the Deep State in the Astral Plane.

There was a movie released just this year in 2017 called Ghost in the Shell who is played by the Actress of Lucy.

Both movies revolve around experimentation on Humans.

The Ghost in the Shell revolves around a Human Hybrid who is part of a secret Military Super Solider Unit that creates and uses Hybrids that are part Human, part Computer and part God only knows. In the movie the Hybrids unite and escape and fight against the Humans.

The themes are always the same because they are related and part of one story they are telling us over and over again. It is the story of the Dragon, the Reptilians, the Fallen Angels, the Hybrids, etc. – just pick a name.

And after seeing the Arizona Wilder testimony and drawings it should be clear that Lucifer is present at US Military bases and in TruthCat interview we saw references to Lilith who is a Demon Deity that was being worship at these bases. So we can know tie the Ritual Abuse of Children.

It is ironic that Lilith was also the name of a Music Festival called Lilith Fair;

The name Lucy is code for Lucifer so too then Lily can be the code for Lilith the Evil Demon that has given birth to an entire race of Dragons and Fallen Ones from the False relationship between Adam and Lilith just as Mary was accused of having illicit relations with a Roman Solider according to the ancient Israelites.

Genesis 6:4 – There were giants in the earth in those days; and also after that, when the sons of God came in unto the daughters of men, and they bare [children] to them, the same [became] mighty men which [were] of old, men of renown.

We get the reference to Lily as part of the Piglets story if you can believe it because we are exposing the Code and could not possibly make all this information up. It is beyond our limited powers.

The FBI specified as part of its search that it was seeking DNA samples from piglets they said were named “Lucy” and “Ethel.” But those were not the names the activists used when publicly discussing the rescue of the two piglets. In their videos about the rescue, they called the pair “Lily” and “Lizzie.” Lucy and Ethel were code names the activists used internally, suggesting that agents were surveiling the activists’ communications — either electronically or through informants — in an effort to find the two piglets and build a criminal case against the group.

If we just look at the highlighted words here and the words are Lily, Lizzie, Lucy, DNA, Ethel, Piglets, Code names, and surveilling then what evidence do we need to understand the underlying points hidden in plain sight they are trying to tell us.

We are Code Breaking and as this point in this timeline we are all either Code Breakers or Code Enablers. We have to choose sides and engage the enemy.

Consciousness defeats the Enemy and they know that. Just as TruthCat stated that the battle is in the Astral Plain he is right on an Astral Level. Indeed there is a War happening before our eyes and ears we cannot see or hear it, but it is happening.

The truth from TruthCat was that Lucy was also a reference to Black Goo and hence advanced Demonic Alien Technology that is emerge with Humans to create Hybrids and infect all of our Hardware, Software and Wetware.

That was the Evil Contract the Elites entered into for Mankind and his DNA; Wetware for Hardware and Software. We traded our DNA for Technology. And the Technology we take for granted and interact with on daily basis was derived in part from this Contract.

The Transformers told of this Trade. Hollywood hides the Truth with Mockery. All the pieces and these films are all inter-related and inter-connected in many Esoteric ways.

The Roots of Magick and Technology was indistinguishable; “They are been here forever…”

The Secret they have Hiding for Generations they are now Telling Us in Hidden in Plain Sight. What they were creating were Abominations as in the Locust Army that is about to be released as Jonathan Kleck has been warning now for a few months.

The Circle Complexes and the Underground Bases

Another odd connection between the Underground Bases and CERN and our discussion so far on the Occult significance of the Piglets Lucy and Ethel can be found in the research of Quinn Michaels who has been investigating the 93 Society and their connections to Satanic Ritual Abuse and Nazi Hyrda like Chaos Creation using Project Mayhem.

It was either Circles or Pyramids, but the Occult Symbology was always there.

Because what is the name of the Farm that was raided by the FBI? It was called the Smithfield Circle Four Farms. We cannot even try to make up such things that is everything here is referenced.

And what do you find at the Getty Museum? A Giant Circle Complex once again. All the pieces fit together.

The Underground Bases and the Piglets

What is being told to us is that if the FBI is searching for Lucy and Ethel the 2 Piglets that we are being told in Code that something has escaped from an Underground Facility that is “like” the worst case scenario captured in the Occult Classic called Cabin in the Woods.

They are either releasing these Locusts on purpose or they have lost two Assets that they now searching for as in Virus Pair that escapes. It was same scenario is another Scarlett movie called The Island where she as a Pair escapes the Island where they are creating and experimenting with Human Clones.

In this Hollywood Vision Board the Demons and Hybrids and Legends of the past escape again here from the Underground Base and freak havoc. What Alien Hybrid race are they birthing and releasing? Remember, it was Only the Cannaboid few escaped.

If readers are still driven by their right eat Swine and whatever else they choose then think of it in another way; “You are what you” and the Law of Karma states that what goes around comes around therefore what you choose to put in your body manifests itself in your body because your body feeds of that nutrition or malnutrition which you are giving it.

Garbage in = Garbage in Mind and Body. Trauma in = Trauma In and Out.

@zurichtimes on Twitter.com and Gab.ai